What makes a Persian Sheep special?

Many people when seeing Persian sheep for the first time mistake them for goats.  They are however a handsome breed of sheep.  The outstanding feature of Persian sheep is their colour and pattern.  Persian sheep come in two basic varieties:-
1. Coloured head(kleur kop in Afrikaans)– in this variety the entire sheep is white except for the head which can be either black, brown, red, tri-colour or blue. 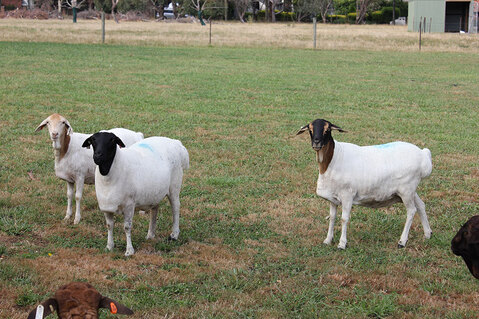 Black headed, red headed and tri-colour headed ewes
​2. Harlequin or Speckled – these sheep have solid coloured heads, legs and tails, while the body is covered with spots and patches on a white background.  The pattern on each  individual sheep is unique.   Harlequin Persians are called ‘Skilder Sheep’ in Afrikaans which literally means painted sheep . This term describes these beautiful animals well.  These sheep are extremely attractive and can also either be black, brown, red, tri-colour or blue
​Both varieties can be routinely inter-bred and the resultant lambs always have the distinct pattern of one variety or the other. Genetically the ‘coloured head’ pattern is recessive to the harlequin pattern. This means that to breed a ‘coloured head’ lamb either both parents must have coloured heads or be carrying the ‘coloured head’ gene. 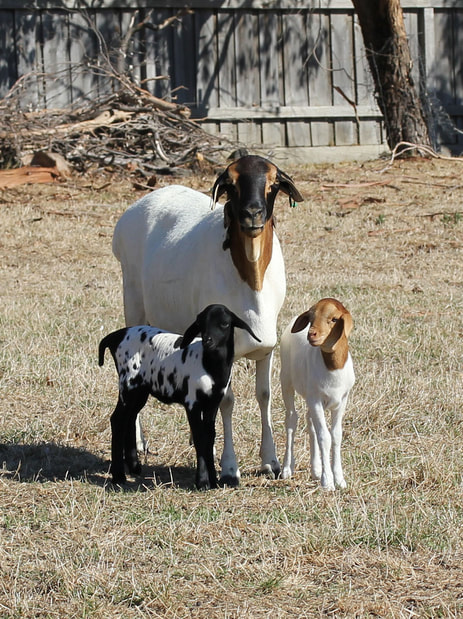 Tri- colour headed ewe with her Black speckled and Red headed twin ewe lambs
In both varieties the hooves are coloured and match the coat colour. The ewes do not have horns. The rams  also generally do not have horns but approximately  one in fifty rams having small horns that sit flat against the head.
Persian sheep  also have a number of distinctive structural features. They have a large flap of skin called the ‘dewlap’ which extends below their throat and  also a prominent anterior breast bone called the ‘manubrium’.  When in good condition they store fat naturally in an area around the tail base.  This fat can be used as an energy source and is a characteristic shared by some other African breeds of sheep.  Because of this characteristic this group has sometimes been referred to as ‘fat bottomed’ sheep.
Persian sheep have a unique tail which is about the size of a human finger and sits at a somewhat quirky angle on top of the tail fat pad.  The first part of the tail is attached to the rump while the second part is pushed upwards and ends in the tassel or ‘sambokkie’ which hangs down perpendicularly.  The overall appearance is that of an attractive, exotic animal. 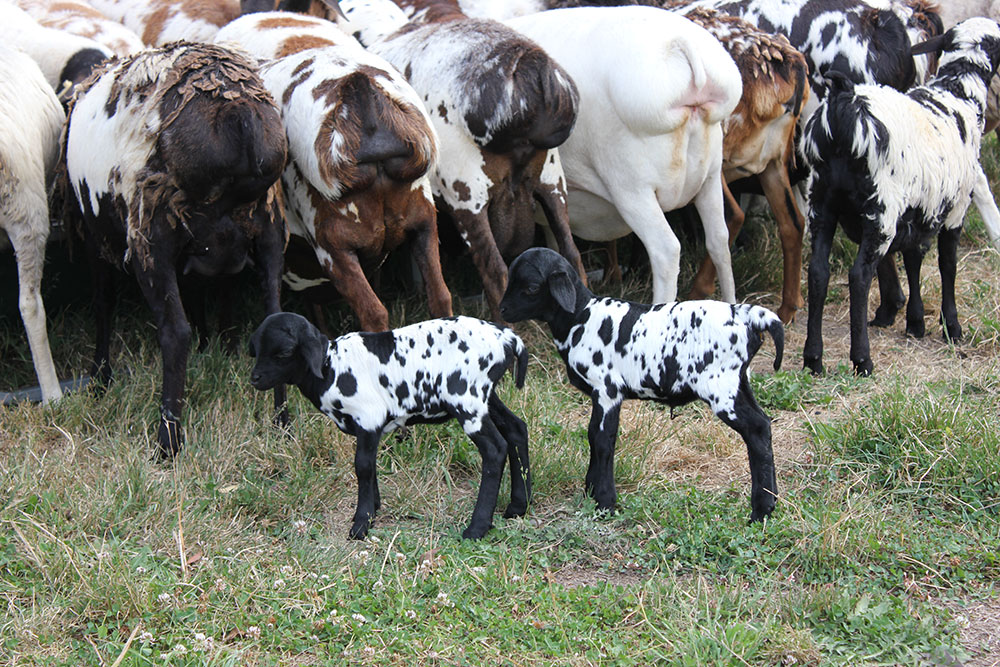 Persian sheep in good condition have fat pads in the area around the tail base. The tail is naturally small and ends in the tassel or sambokkie (in Afrikaans). In the fore ground are two Black speckle ewe lambs