​Colour inheritance in sheep can be a complex topic. The notes below are far from exhaustive or detailed and simply aim to address some of the more relevant issues that relate to Persian sheep.

In order to understand the inheritance of sheep colour there are some basic genetic terms that need to be understood. Put simply chromosomes are made up of a series of genes. Genes are sequences of nucleotides (amino acid combinations). Genes have different forms called alleles. These different forms of a gene ie alleles are located at the same position (or genetic locus) of a chromosome. Sheep have 27 pairs of chromosomes.  At fertilization the new sheep gets one of each pair from the ram and one from the ewe. The new pairs of chromosomes created in this way determine the genetic makeup and characteristics of the new sheep. Much interesting work has been done on the pattern of inheritance of a number of factors including colour in sheep. Work of particular interest to Persian breeders is discussed below.

Coloured Head or Kleur Kop
On the sheep chromosome is a locus called the pigmented head locus. A number of different forms or alleles are present at this locus, one of which is called the Persian allele. This allele restricts the colour of the animal to the front portion of the animal. This allele is found in a number of breeds in Africa and Asia. Researchers suggest that when considering the colour of the animal not to think of it as a white animal with a coloured head but rather a coloured animal with a large white spot on its rear section. The position of the demarcation line between the white and coloured areas varies in breeds. In some breeds ( eg the Uda and Bali Bali ) the line of demarcation is around the midriff or just in front of the hind legs. In the Somali (from which the Persian was developed) and in the Dorper ( which in turn was developed from the Persian ) the line of demarcation occurs about half way up the neck. The Persian allele at the coloured head locus is carried recessively. This means that for a lamb to have a coloured head it must inherit the gene from both parents. Likewise if a lamb inherits a coloured gene from one parent and a speckled gene from the other it will always be speckled.
​White Markings on the Head
In some coloured head Persians the white can extend onto the coloured head. This is regarded as a mismarking and a serious show fault. This colour pattern is explained by the action of modifiers at the pigmented head locus. The modifiers have the effect of enlarging the “white spot” on the body so that it extends onto the forehead and sometimes down onto the face. Because the modifiers that allow white to extend onto the head are heritable, animals mismarked in this way are likely to breed more sheep with the same fault and should not be considered as breeding animals.
This ewe has inherited genetic modifiers at the Persian allele on the pigmented head locus. This has allowed white to extend onto her fore head. Her lamb illustrates the heritability of this modifier. In the lamb the white extends beyond the fore head onto the face and also down onto the legs. Such sheep are termed by breeders to be “undercoloured” and should not be included in stud breeding programs.
The Dilute Locus
On the chromosome of a Persian is an area (or locus) called the dilute locus. Two different forms (or alleles) are present at this locus. These two alleles are called the wild allele and the lethal dilute allele.

The wild allele is the most common and when this is inherited on both chromosomes the sheep is a solid colour. However, when the lethal dilute allele is inherited on one chromosome this modifies the colour of the coat so that when it is inherited with black ( ie the sheep inherits the gene for black colour ), it produces a grey colour while when mixed with red it produces a roan colour. Grey (also called blue) and roan are termed dilute colours.
Sheep that inherit one lethal dilute allele on one chromosome from one parent are therefore a dilute colour (grey or roan) and are robust. However animals that inherit two lethal dilute alleles, one on each chromosome from each parent ( ie are homozygous for the dilute lethal allele) although also grey or roan are not robust. The lethal dilute gene is sub-lethal when homozygous. These sheep fail to thrive and have a reduced life expectancy. For this reason dilute coloured sheep should not be mated together.
​
Having said that, breeders should not be discouraged from breeding dilute animals. The grey and roan animals carrying one lethal dilute gene are perfectly healthy and are beautiful animals. They are deliberately bred by specialised breeders around the world. Such animals should however only be produced by mating dilute coloured animals to black or red sheep.

Three brothers (the result of embryo transfer), two blues and a dilute tricolour
Tricolour, Black and Tan and Sable Persians
​In sheep there are two types of pigment in the coat---eumelanin and phaeomelanin. Eumelanin is black or brown, phaeomelanin is red (which is often described as tan or fawn). Two loci, the extension locus and the agouti locus are responsible for the distribution of these two pigments. The extension locus determines whether the colour will be black or red while the agouti locus determines the regions in which the two pigments will occur. Depending on the pattern of inheritance, the colour and also the pattern of the colour is determined. Various patterns are produced which are given various names. Black and red animals with white speckles are called “tricolours” or “dobermans”. If the white speckles are not present these uncommon animals are called “black and tans”. In another rare pattern the black markings are reduced to stripes on the face and legs . These attractive animals are called sables (or are said to be badger faced). Also inheriting the lethal dilute allele modifies these colours and patterns to create dilute tricolours, blue and roans and dilute sables respectively. 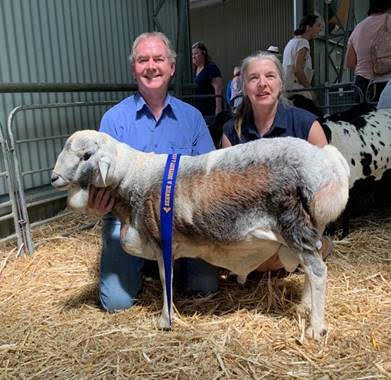 Combining the lethal dilute gene with the black and tan pattern results in a blue and roan sheep. This dilute blue and roan ram is a show winner. Exhibited by Colin and Meredith Walker, Coolibah Persian Sheep Stud
​Brown Locus
Another locus on the sheep chromosome is called the brown locus. Brown in Persians is an attractive chocolate colour and should not be confused with red or tan. Two alleles are found at this locus. The most common and dominant is called the wild allele and if this is inherited the sheep is black. The other locus is called the brown allele. This is recessive and occurs in all fat-tailed sheep including Persians. When sheep inherit this gene they are brown. This is an extremely rare colour in Persians. In the Persian breed these rare sheep are called “chocolates”

A chocolate ewe. This ewe has inherited the brown allele at the brown locus
​Breeding for Black—a note for breeders
From a show point of view, black Persians (both Skilder and Kleur Kop) should only be mated to other blacks. Mating blacks to other colours particularly reds or tricolours tends to decrease the intensity of the black and also introduce red hairs into the black coat. This is particularly apparent on the lower legs and abdomen. Often a “copper sheen” can be seen on the black areas. Both detract from a show animal’s appearance.
​We still have much to learn about the colour inheritance of Persian Sheep. These brief notes only touch on some of the genes and patterns of inheritance of particular relevance to the Persian breeder. With time as more research is done and observations are made of the outcomes of various mating’s by astute breeders our knowledge will become more complete.